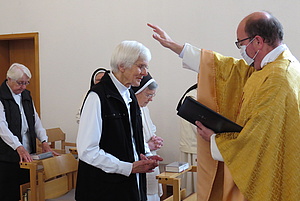 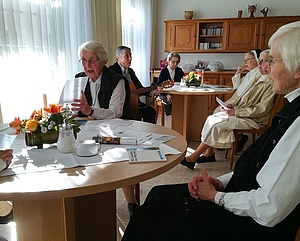 Sr Ursula celebrated her Jubilee of Profession together with her Dominican Sisters in Neustadt. 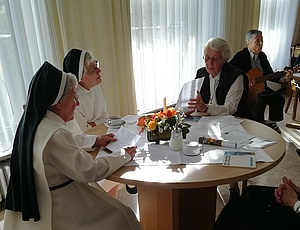 The sisters serenaded the jubilarian.

The longing to recognize Christ in everything and everyone, to “live into" his love and life anew every day and to allow herself to be permeated by his spirit, shapes the vocation of Sr Ursula Bomholt OP to this day.

With Sr Ursula, we celebrated the 60th anniversary of her Religious Profession on Saturday, 10 October 2020, in Neustadt.

In his sermon, Father Johannsen, pastor of the Parish Community of 12 Apostles at the Gate to the Spessart, combined thoughts of Meister Eckhart with Sr Ursula's motto in life and reminded us that in the vicissitudes of itinerancy, which is always associated with homelessness, God wants to be our anchor and home. Wherever we are, God is there. With this certainty of faith, Sr Ursula follows the example of St. Dominic as an itinerant preacher.

She entered our Congregation in January 1959 and made her First Profession on 10 October 1960, before being sent to California in August 1961. There she began to assist in the school and learned - as was probably common back then - language and teaching skills "along the way". Sr Ursula used her free time and holidays to study for the teaching diploma.

1974 saw the fulfilment of her dream to go to our mission in South Africa. She lived and worked in Ekukhanyeni (Natal) for a year before she was called back to California to be the novice mistress from 1975 to 1977.  After a sabbatical, during which she received training in leadership, she became the principal of the school in Santa Clara/California.  She then became a pastoral assistant at the university of Tucson/Arizona until 1986. There, too, she trained in individual counselling in her free time.

A second sabbatical took Sr Ursula to Switzerland, where she completed a diploma in Jungian psychology in 1990. She returned to the USA and worked as a supervisor for the staff at a hospital. In 1991, our sisters in the USA elected Sr Ursula Provincial Superior. In 1998, at the Congregational Chapter, Sr Ursula was elected Congregational Vicar for six years and returned to South Africa for that time in office.  Back in California, Sr Ursula gave spiritual guidance to people who were searching for God or for meaning in their lives and offered retreats.

Sr Ursula has been a Dominican presence in the midst of the people in Lohr now for a year and accompanies our own sisters in the Senior Citizen’s Home St. Martin.

We are grateful for the courageous testimony of Sr Ursula and wish her the joy of being able to recognize Christ ever more deeply and to be transformed into his image.