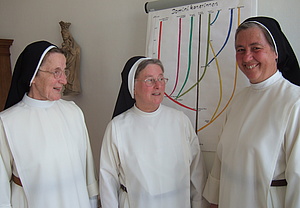 Sr Irmengard at a meeting between two Dominican Sisters from Landsberg. 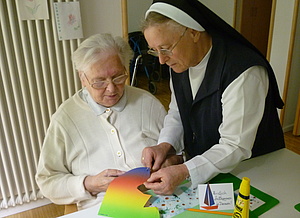 Sr Irmengard with Sr Julita (who has since died) engaging in creative work in the nursing ward. 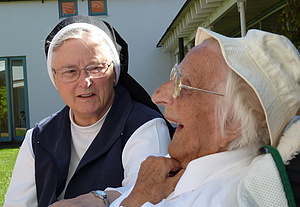 Sr Irmengard with her aunt, Sr Hedwig, who, unfortunately, has already passed away.

Sr. Irmengard Götte OP is the last of our Sisters who still entered the Diessen Convent/Congregation before these Sisters joined the Oakford Congregation in 1967.

Before Sr. Irmengard joined the Sisters in Diessen in 1965, she had completed a training as nursery assistant and worked as such in the family of a medical doctor in a place near her home town Nordhorn close to the Dutch border in Northern Germany.

Her aunt Sr. Hedwig Walter had already lived in the Diessen Convent since 1956. After entering the convent, Sr. Irmengard helped in the boarding house in Diessen before she was sent to Oakford soon after her first profession in 1968.

After making Final Profession in Oakford in 1971, Sr. Irmengard returned to Europe where for a short time she helped with the house-keeping in our Casa di Studio in Rome, then in Neustadt and Volkersberg.

In the beginning of the year 1972, she was sent back to Diessen where she served as mother of boarders until our boarding house was closed in 1992. Then she worked in the Diessen kindergarten for another eleven years.

After her retirement in 2003, Sr. Irmengard helped in the large convent in Diessen in many ways. Her favourite occupation was serving the sisters in the infirmary. She cared for the former boarding mistress Sr. Bertranda until she died.

Almost daily she spent the afternoons with the old Sisters – singing, reading to them and occupying them with simple art craft. Sr. Irmengard's special talents lie in art work and music. Since August 2019, she has now lived in Neustadt.

Because of „Corona“, her 80th birthday could be celebrated „only“ in the convent. It was, however, a happy day for which Sisters from several places came to Neustadt. We wish Sr. Irmengard God's blessing for every day to come and a heart full of gratitude for her rich life.