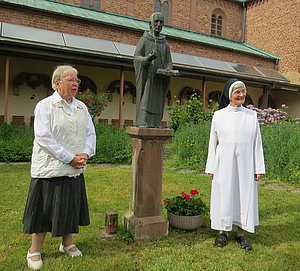 On 30 May 2020 Sr. Hilke Stenner OP and Sr. Magdalena Stauder OP celebrated their Golden Jubilee of Profession in our religious community. 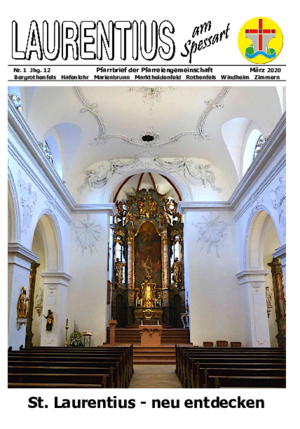 Because of the corona pandemic, this celebration took place only on a small scale within the home community. Nevertheless, it was a nice day for everyone, because we had enough reason to be thankful for twice 50 years of lived faithfulness.

Sr. Hilke and Sr. Magdalena both come from Mainz-Bretzenheim, where they went to school together and did many things in their free time before entering the convent. After two sisters from Bretzenheim had already joined us, they discovered their own Dominican vocation and joined Neustadt in 1967.

After her novitiate, Sr. Hilke completed her studies in Paderborn and worked from 1977 to 2013 as a social worker and therapist in the St. Michael Rehabilitation Centre, where she accompanied more than 1000 persons in the rehabilitation programme, with a lot of understanding and heart, back into “normal life".

After she was appointed Novice Mistress in 1984 to 1992, and elected Prioress in the Neustadt community in 1993 to 1999, she reduced her working hours in the Rehabilitation Centre.  Retiring in 2013, she took on responsible tasks in the provincial administration with zeal and energy.

In 2018, Sr. Hilke was appointed coordinating Prioress of the Local Community and, together with a management team, looks after the concerns of her fellow sisters. Her friendly and peace-loving nature promotes a good and open atmosphere. In addition, since 2012, when she was commissioned to conduct parish worship, she answers the call of God to proclaim His love by preparing and conducting liturgies and by visiting homes to bring Holy Communion to the sick.

After her First Profession, Sr. Magdalena trained as an educator and then became an assistant in youth work at Volkersberg until 1982. She then supported the team at the St. Michael Rehabilitation Centre for two years before working as a kindergarten teacher in Ansbach.

In 1987 she was transferred to Dießen, where she worked for another 13 years in the kindergarten in Utting as an educator, including some of it as its leader.

When she was transferred to Neustadt in 2000, until her retirement, she was able to proclaim the redeeming and saving message of the gospel and share joy and hope, sadness and fear with people as a pastoral worker in Marktheidenfeld. In order to be able to continue to live the apostolic mission even in her retirement, Sr. Magdalena now lives among the people in Marktheidenfeld.

Dominican preaching has many facets. Sr. Hilke and Sr. Magdalena realize them with the diverse and different talents God has given them. May their lives and work continue to be blessed through all the challenges life offers.