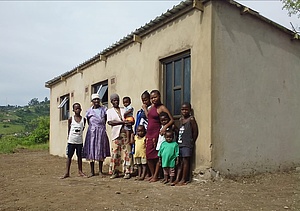 Thanks to the proceeds from the mission bazaar and donations, a dream came true for Kethiwe's family.

For many years, the women of the Mission Committee of the parish of St. Anthony in Rheine (North Rhine-Westphalia) have supported our work in Ekukhanyeni in South Africa with the proceeds from their traditional mission bazaar.

The Dominican Sisters used part of last year's proceeds for one of their heart's desires. St. Natalie tells us about it: "One of our heartfelt concerns is Kethiwe's family. Kethiwe, a young woman, was with us at the hospice to die. She desperately wanted to visit her family again and died at home. Shortly after, her mother came and asked for food. Sister Anna Rose visited the family and was shocked by the broken round hut in which ten people live. We would now like to build a small cottage with two rooms for the extended family. Dear staff, dear congregation, in the name of the sisters, the patients and the extended family we would like to thank you for your great support. In prayer we are always united with you."

Income from mission bazaar and donations made the impossible come true

Through the St. Anthony's Mission Bazaar and the appeal for donations in the newspaper, the impossible came true. Sr. Anna Rose and an AIDS Hospice staff member worked to ensure that building materials could be purchased and delivered. Builders and family members worked daily on the new house.

Many thanks to all who helped and donated.

We were also able to quickly deliver reorders of materials to the impassable area. It is incredible for the family of Kethiwe to be able to move into a new house after such a short time. The family is infinitely grateful and would like to pass on these thanks to all donors in Germany.

One of the biggest problems in South Africa today is still the enormous discrepancy between rich and poor. More than half of South Africa's inhabitants live below the national poverty line. The black population is particularly affected. There is hardly any other country in the world where income and wealth are so unequally distributed as in South Africa.

High unemployment, which has worsened as a result of Corona

Unlike Germany, South Africa is not a welfare state. Unemployment, old-age and health insurance are largely subject to private Initiative. 20 percent of the population has no income. About 40 percent of blacks heat mainly with wood and have only candles as a source of light.

Kethiwe's large family, after the sisters intervened, now receives a small social allowance from the state. They are happy to finally have a solid roof over their heads.