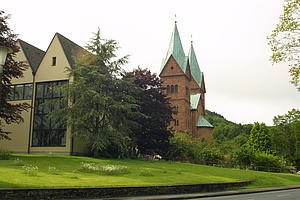 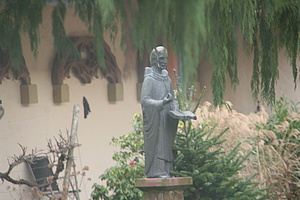 The Dominican Sisters of St. Catherine of Siena of Oakford/Natal will leave the mission house of St. Josef in Neustadt at the beginning of 2023 and move to the Senior Citizens' Residence in Kist (near Würzburg).

As in many religious congregations in Germany and Western Europe, the Dominican Sisters in Neustadt are lacking young people. Currently, 13 Sisters live in the large monastery on the Main, the youngest is 76, the oldest 93 years old.

This marks the end of more than 100 years of history in Neustadt. In 1909, the Sisters came to Neustadt to open a house of formation for future nuns who were to be sent to the mission in South Africa.

In an interview with Sr Christiane Sartorius OP, Provincial Prioress for Germany, it becomes clear that the Dominican Sisters did not take the decision to leave Neustadt lightly and that the process took many years.

The decision for the Sisters to leave Neustadt may have come as a surprise to outsiders, but for you it was a logical consequence - Why?

Sr. Christiane: "Our Dominican Constitution states that the religious leadership must ensure that the Sisters are cared for and can lead a religious life. To pray, eat and work together. They must also have a task - the apostolate - and be able to live their vocation as Dominican Sisters until their last breath.

We want to find a place where the Sisters could stay and live in community as a community and have someone else take care of their health and care. Unfortunately, that was no longer possible in this way at the convent in Neustadt - despite of our wonderful staff."

What does it take to bring such a multi-layered process to a good conclusion?

Sr. Christiane: "Since the beginning of 2012, we have been looking at the development of our religious community and considering what our path to the future looks like. At the beginning of 2012 we were 48 Sisters in Germany, today there are 26. In the past ten years the order has also changed, Sisters became ill, died.

All along the way, since 2012, we have always felt that God is by our side. We have had help and support from outside, we have had trusted advisors who have accompanied us and walked with us the steps necessary to answer the question: How does our path as a religious community go into the future?

We are not the only religious community in such a situation. It is a process to go through.

Independently of this, we also considered how the monastery in Neustadt could be used differently. This would have been possible in parts and the Sisters could have stayed in one wing. But here, unfortunately, we have not found anyone who wanted to step in during the past ten years.

How did you find out about the Kist Senior Citizens' Residence

Sr. Christiane: "Our original plan was for the Sisters to move as a community to the Caritas retirement home St. Martin in Lohr. Six Sisters in need of care are already housed there. Unfortunately, it was not possible to accommodate the 13 Neustadt Sisters and two other Sisters together at St. Martin.

Therefore, we had to make a decision in order to give the Sisters peace and security again. Some of them were afraid of needing care and then perhaps not being able to get a place in Lohr because the nursing home would no longer accept patients. The Sisters were worried and also insecure. We had to do something to give them security again.

When the opportunity arose at the Kist Senior Citizens' Residence to accommodate all 15 Sisters together, we decided to move. In the privately run facility, the Sisters can live together on one floor in residential groups and are cared for according to their care levels."

What does "Oakford in Germany" mean?

Sr. Christiane: "'Oakford in Germany' is the title we have given to the process by which the Sisters will shape their religious life in a new environment. We were supported by a Sister from another Dominican community, who accompanied us - with an external view - and structured the individual steps that now have to be taken.

Each Sister was able to choose her own room in the senior residence. The employees from Neustadt accompany their Sisters and support them in packing and setting up in their new domicile. Each Sister is accompanied, none left alone with the task of moving.

However, the process continues after the move. Then the next step is for each Sister to see what is her apostolate, her new task, because we remain religious until our last breath."

Will there continue to be a common anchor point for the Sisters?

Sr. Christiane: "We are a missionary congregation. Our Dominican life or 'Oakfoad Charism' is not tied to one place. It was Neustadt until now but it is not attached to Neustadt.

In the future, the senior residence in Kist will be the anchor point for the Sisters in Germany. We will also have a small chapel there where we can celebrate services. We also have common rooms where we can get together.

How can we continue to maintain the community?

Sr. Christiane: "By sharing life, praying together, eating together and exchanging ideas. That's what we did in Neustadt, and that's what we're going to do now in Kist."

Is there already a perspective for the monastery in Neustadt?

Sr. Christiane: "Unfortunately there is currently no new perspective for the monastery in Neustadt. Our administration of the Franconian Province of the Dominican Sisters will continue to have its headquarters in Neustadt. In addition, we are in contact with experts who also support other religious communities in the search for a new use for their monasteries."