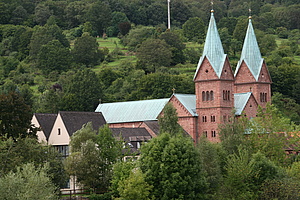 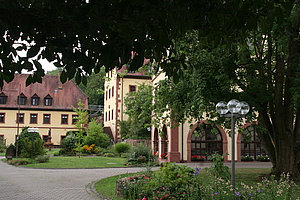 In the convent grounds 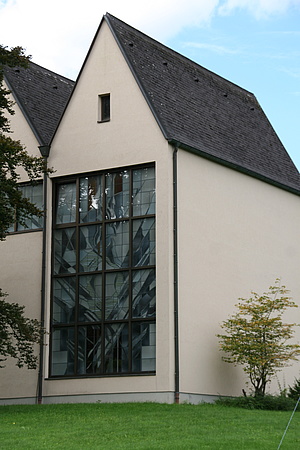 Chapel of the Convent of St. Joseph

As in most religious communities in Germany and Western Europe, the Dominican Sisters in Neustadt lack young religious. Currently, 13 elderly sisters live in the large convent at the Main.

In a lengthy process, the sisters had considered the development of the community and finally decided, with a heavy heart, to look for an alternative for the building, which had become much too large. Unexpectedly quickly, this search was successful. At the beginning of January 2023, the sisters will move into the newly built “Seniorenresidenz - Kist GmbH”.

This marks the end of more than 100 years of history in Neustadt. In 1909, the sisters came to Neustadt to open a training house for future sisters who were to be sent on mission to South Africa.

In the 1970s - in cooperation with the Diocesan Caritas Association - a rehabilitation centre for mentally ill young people was built on the grounds of the former Benedictine abbey. For many years, the sisters were active there in management and therapy. In 2017, the rehabilitation centre was moved to Würzburg.

The sisters regret their departure very much. They have to leave a lot behind: The parish, with which the sisters are very connected, friends and the staff, some of whom have been working for the sisters for many years.

For Neustadt, too, the departure of the Dominican Sisters marks the end of an era, for the village and the convent of St. Joseph were inseparably linked. The local community reacted to this decision with much understanding but also with great regret.

Now plans for the future of the convent building are being worked out in close consultation with the Neustadt municipal administration.

For the Dominican Sisters of Oakford: