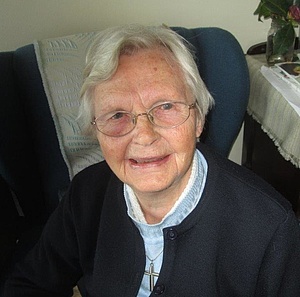 Sr Celine Nordmann who had lived in retirement at Villa Siena , Pietermaritzburg, South Africa died there on 5 July 2022.

She was born on 5 February 1926 in Lohne, in the Diocese of Münster (Germany). At the time of her death was the oldest member of the Congregation. Sr Celine had entered the Oakford Congregation in Neustadt in October 1950 and did her postulancy and noviciate there where she received the name Celine. She made her First Profession in Neustadt on 29 June 1952 and her Final Profession in Oakford on 8 July 1955.

She served in the Congregation at the hostel in Frankfort and after her arrival in South Africa was trained in general nursing, midwifery and theatre nursing.

She also worked with our own elderly Sisters in the infirmary at Oakford, with the local people in the clinic at Oakford, in our two maternity homes (Marymount and Marifont), at Osindisweni Hospital where she was assistant matron, and among indigent elderly people at KwaGertrude at Oakford.

She was a perfectionist in all she did as a nurse, as a seamstress, with her plants. She was a caring person when she lived in Marifont as Prioress, caring too for late Archbishop Garner with great love and attention.
We are grateful for the testimony of Sr Celine´s life and trust that she will now be fully united with her God and that she will be our advocate with God.

May she rest in peace.

Read more in the obituary