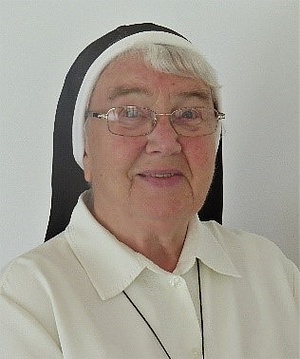 “Whether we live or whether we die we belong to the Lord.”
Rom 14:8

Emma Bechold was born in Burgsinn near Gemünden (Germany) on 7 May 1937. She entered our Congregation in Neustadt (Germany), in January 1957 and she made her First Profession on 2 May 1959 in Neustadt and three years later her Final Profession.

1964 she was sent to England where she spent almost 50 years of her religious life which was was colourful and varied.

She naturally lent a helping hand, wherever she went. She approached people with her kind, humorous, outgoing and relaxed manner, and took time for them and their concerns, worries and needs

Sometimes this happened over a cup of tea, sometimes it happened when she took holy communion to the sick, where she carried Christ to the people and with Him gave them a good and hopeful word on the way.

May she live in His love and be an intercessor with God for us and for the many people who mourn her death.

You can light a candle für Sr. Emma in the online condolence book

Read more in the obituary