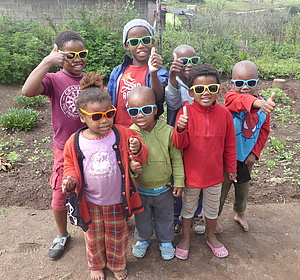 Children from the AIDS orphanage with sunglasses from Germany 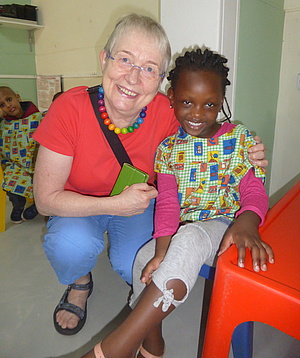 Magdalene Wolters with a little protégé 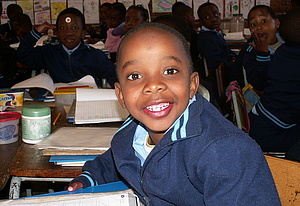 Learning can make you happy: At Bertrams School 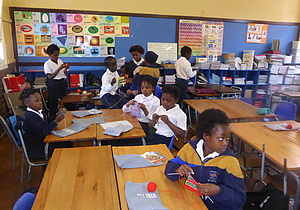 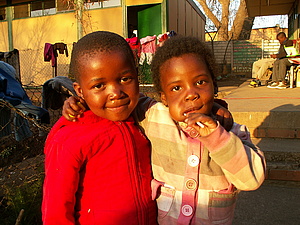 Children in the township

Magdalene Wolters loves South Africa and has been very involved with the facilities of the Dominican Sisters of St Catherine of Siena of Oakford/Natal for decades. From 1981 to the end of 1983 she lived and worked at "Oakford Priory". There she gave physical education and swimming lessons at the primary school for African pupils (under apartheid) and also worked in the school's office.

The pupils of the secondary school lived in a boarding house at Sacred Heart Primary School. Magdalene Wolters took care of the afternoon activities of the children and young people and gave catechetical lessons in an Indian township, i.e. she prepared the children for the sacraments.

During her time in South Africa, she got to know the beauty of this country but also the hardship and misery there. Since then, she regularly visits - at her own expense - the various projects she has set up in South Africa. In February/March 2019, she was there for the last time, Corona has unfortunately slowed her down for the moment.

During her many visits, Magdalene Wolters has noticed that many things have changed in South Africa over the years and that poverty - especially due to the consequences of AIDS - is becoming ever greater. Among other things, she supports the Ekukhanyeni AIDS hospice run by the Dominican Sisters with donations from the Mission-Bazaar, which the women of the Missionary Committee of the parish of St. Antonius in Rheine (North Rhine-Westphalia) organise every year in November.

In order to help the people, especially the children in South Africa, the now 71-year-old launched the project "Sponsorships for South Africa", which provides important and effective help for the people there.

"Through the sponsorships I have arranged, hundreds of children have already been helped, and several have now achieved their school-leaving qualifications and are studying or working," she reports. Taking on a sponsorship enables children to attend school. "Supporting a child in primary school, grades one to seven, costs about 80 euros a year. The money is used to pay for school fees, school uniforms and necessary school materials," says Magdalene Wolters. You can read herehow to become a sponsor.

After returning from South Africa, Magdalene Wolters worked for almost 30 years at a socio-therapeutic transitional facility for homeless women with special social problems until she retired in 2013. She is active and fundraises to support their many projects in South Africa. She is tireless in helping and supporting the people there.

The community of sisters is very important to Magdalene Wolters

"The years in South Africa are among the most beautiful ones of my life. It was not always easy, but I am grateful for the many experiences I have had with the people in their simplicity, poverty and gratitude," she says. "For me, the years were incredibly fulfilling and enriching!" South Africa has become a second home for her.

The community of religious sisters was also always important to her. "We lived, prayed, worked and ate together. I was able to visit all the sisters' missions throughout the country. Bendell was particularly impressive." (Note: Bendell is a region in what is now the North West Province, formerly the Homeland of Boputhatswana. It is a desert-like area. During the apartheid, Bendell was a resettlement area. This meant people were resettled there from "white" areas - with no jobs, no electricity, little water, no amenities).

If you are interested in Magdalene Wolters’ work and her projects or would like to sponsor a child, read on here.