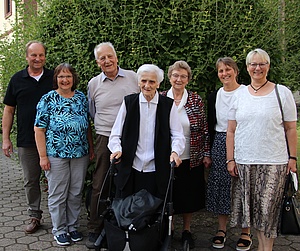 Sr. Maria-Linus with her family 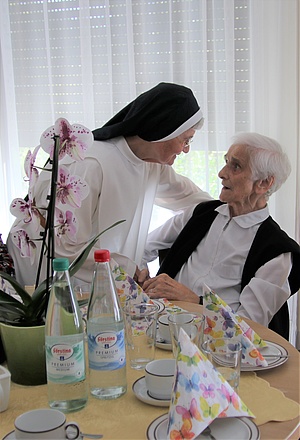 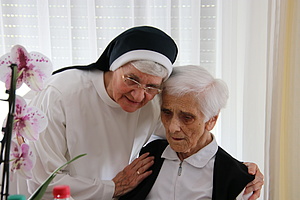 … and a card, which they are reading together 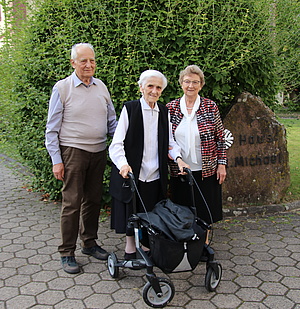 Sr. Maria-Linus with her brother and sister-in-law

Together with her family and her fellow Sisters, Sr Maria-Linus Rudolf OP celebrated a round birthday, her 90th, on Saturday, 2 October 2021.

The festive birthday celebration took place in the convent at Neustadt. In compliance with all Corona regulations, all birthday guests were vaccinated and adhered to the requirements. Sr Maria-Linus' brother and sister-in-law with her nephew and nieces came especially for the celebration from Schwindegg near Munich.

Sr Maria-Linus was born on 2 October 1931 in Weseritz (Czech Republic). She attended primary and secondary school in Weseritz. In 1945, due to the War, the family had to flee to neighbouring Bavaria. Sr Maria-Linus began a commercial apprenticeship in Altötting in 1946 and subsequently worked as a commercial clerk.

In July 1954 she entered the Congregation of the Dominican Sisters of St. Catherine of Siena of Oakford/Natal in the convent of Neustadt. She made her First Profession in Neustadt on 3 May 1956 and was sent to South Africa soon afterwards.

Sr Maria-Linus obtained her National Senior Certificate and then studied to become a teacher at the University of Natal (now the University of KwaZulu Natal)  in Pietermaritzburg. She then taught at the Order's own schools "Sr Aloysius" in Oakford (South Africa) and "St Theresa's High School" in Manzini (Swaziland - Eswatini). The dedicated geography and Afrikaans teacher loved to collect stones and knew how to tell a story about each of these.

In February 1962, Sr Maria-Linus made her Final Vows in Oakford (South Africa). She worked in South Africa for many years. In 1980 she completed training for leadership in Denver/Colorado (USA). From there she returned to Germany in 1981. Except for a twelve-month stay (1992 to 1993) in the "Casa di Studio" study house in Rome/Italy, she has lived in Germany ever since.

In the convent of the Dominican Sisters in Dießen am Ammersee she was subprioress from 1981 to 1983 and prioress from 1983 to 1986 and supported the formation team with her experience.

In 1987 she moved to Flörsheim. There she worked in the administration of the Order’s own  Marienkrankenhaus Flörsheim and - after special training in 1986 - also became involved in the pastoral care of prisoners in Flörsheim.

In 1993 she went back to Dießen. There she joined the team of Sisters who did duty in the office at the entrance to the convent, welcoming guests. When her strength began to wane, she came to Lohr in 2019 to the "Caritas Seniorenzentrum St. Martin". Since then, she has spent her well-deserved retirement there.

We wish Sr Maria-Linus God's blessing, joy and much strength for the future.