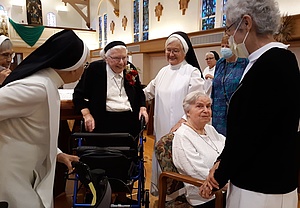 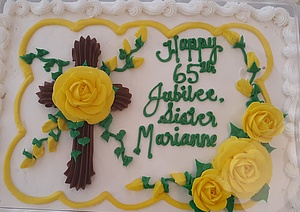 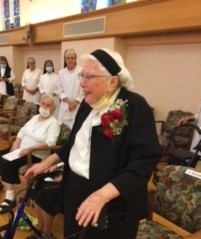 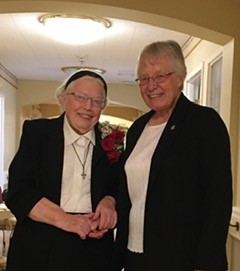 Sr. Marianne was born on 15 July 1927 in Hembsen, District of Hoexter (Germany). She had a strong desire to be part of the evangelization of the people to Christ.

On 15 January 1955 she entered the Dominican Congregation of Oakford with the hope of being sent to the missions in South Africa. However, at the time, South Africa did not allow missionaries into the country.

Sr. Marianne made her First Profession on 12 September 1956 and spent the next few years in our convents at Frankfurt and Flörsheim.

In 1968 she was sent to California and served as cook at Oakland, Santa Clara and Villa Siena in Mountain View. She also served as night nurse, activity director, helped residents with their art projects.

At a recent interview she was asked what she would like to impart to today’s young people. She responded: “

Sr. Marianne: "I would like to impart to young people the value of living and keeping their faith by keeping it alive and by looking at being positive rather than being negative.To participate in life is to bring alive the values of hope and, by the help of the sacraments to put love into action. I am a firm believer that one needs to nourish faith by active actions of love."

Although we continue to be regulated by Covid restrictions, we found ways to be together as Oakford Dominicans, pray, celebrate, rejoice in God's fidelity and the witness of Sr. Marianne's joy and faithfulness.