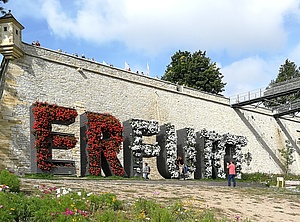 Erfurt in bloom - lettering in front of the fortress wall 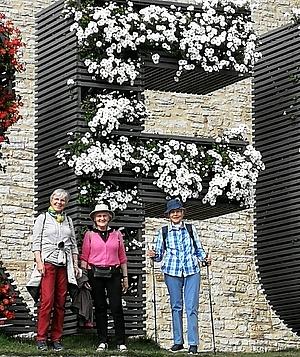 Srs Anna-Lucia, Dagmar, Ursula in front of the flowering F of ERFURT 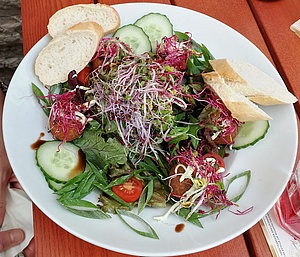 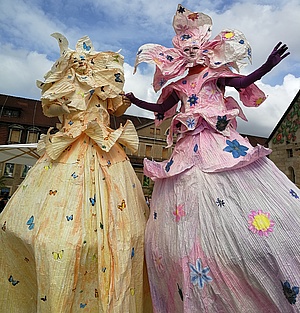 The flowers dance at the BuGa (Bundesgartenschau – Federal Garden Schow) 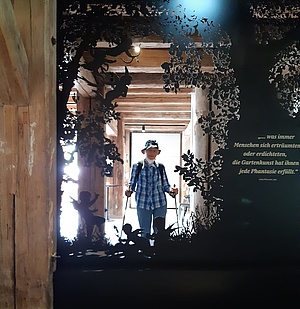 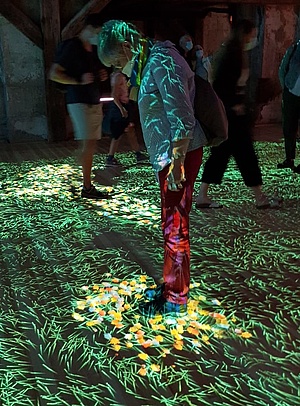 The digital meadow blossoms while you linger, Sr Anna-Lucia tries it out

The Sisters of the "Small Group of St. Dominic" enjoyed their day trip to the Federal Garden Show in Erfurt in glorious late summer weather with all their senses and returned with impressions of the extraordinary beauty and diversity of creation.

On Sunday, 12 September 2021, the five sisters of the "Small Group of St. Dominic "- one of six small groups of the Franconian Province of the Dominican Sisters - went on a day trip to the Federal Garden Show in Erfurt. With this, a long cherished idea came true for them and the sisters were happy that they could finally do something together again after so many Corona-related restrictions.

Early on that foggy morning, they started by bus - heading east, toward the sun, whose power was dissipating the fog more and more. Upon their arrival in Erfurt, the sisters were greeted by a beautiful late summer sunny day.

They took the streetcar to the Petersberg exhibition grounds in the city centre. Along gently ascending serpentine rocks and past the clusters of cosmos, malva, marigolds, chamomile and numerous other flowers, which were continuously visited by bees and insects, they climbed the Petersberg.

The sisters made their first stop at the fortress wall. In front of the wall the visitors were greeted by the sign "ERFURT erblüht" (Erfurt flowers).  An elevator took them to the upper level, from where they had a wide view over the city of Erfurt and a diverse and varied exhibition area opened up.

Before the small community met for a lunch of regional dishes, the sisters - alone or in various groupings - gathered first impressions. They marvelled at numerous flowerbeds, a medieval herb garden, a baroque garden, the church pavilion and, last but not least, the former St. Peter's Church. Here, in addition to pictures of the historical palace and paradise gardens, a digital garden had been set up.

After lunch, some of the discoveries were explored further.  A digital meadow that could be walked on was particularly impressive. The amazing thing was that it began to bloom just when you stopped and rested. The beauty is undescribable, it is a mystical event, a gift that brings joy and a sense of gratitude.

As we went on exploring, the child in us was also invited to overcome the height difference down into the fortress moat via a slide. Indeed, it was impressive to pass the vegetable garden in its colourfulness in the process.

Another highlight was the edible mushroom cultures in a cellar passage with its special microclimate. There were probably many more interesting things to be seen, however, our time was limited.

For the sisters of the “Small Group of St Dominic” it was a day on which they could meet each other in the colourful and artfully designed world of flowers and plants in such a different way and enjoy the beauty and diversity of creation.

"Laudato Si" as a praise of the Creator calls us at the same time to a "response" to preserve God's creation and to deal sustainably with the resources of our earth. Perhaps the Federal Horticultural Show in Erfurt has also inspired one or the other of us as Dominicans to delve anew into the theology and spirituality of creation.

The return journey went westward, toward the setting sun.  Grateful for the day, the sisters returned home.