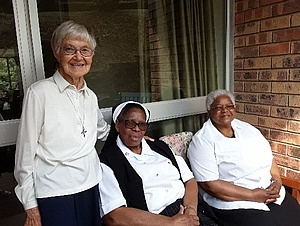 Srs. Angelina, Ignatia and Bernadette (left to right) enjoy the last rays of the afternoon sun

2021, not unlike 2020, has been a challenging year because of the Covid 19 pandemic which has meant that by and large the Sisters have not been able to move around as freely as some of them would like to.

There have been various national lockdowns in the country, and in fact South Africa has been in lockdown since March 2020, very strictly at the beginning and then with some levels of easing in the months after that. Currently KwaZulu Natal is in the throes of a third wave of the pandemic, and homes for the elderly have again had to enforce stricter lockdown.

The Sisters were vaccinated against severe Covid infection, receiving two doses of the Pfizer vaccine this year which has been a measure of comfort. The Department of Health of KwaZulu Natal visited Villa Assumpta on both occasions, certainly making it easier for the Sisters, other residents and staff to be vaccinated.

While there were some Sisters who did contract Covid 19, none of them was infected at Villa Assumpta, a tribute indeed to the staff who implemented strict protocols.

The regular religious life of the Sisters was able to continue as usual at Villa Assumpta except that there were periods when no priest was able to visit for the celebration of the Eucharist. Instead, the Sisters held regular communion services. Some participated in an online retreat in 2020, while others chose a “self-service” retreat.

In both cases, the Sisters could observe the periods of silence they desired and needed. In 2021 it was hoped to have an in-person retreat, but that unfortunately had to be cancelled. Instead, the Sisters were given some guidance for their daily personal reflection and were able to come together in the evenings for faith sharing and prayer.

The retired Sisters also participated in the various group meetings and study sessions requested by the Congregational Leadership as part of the preparation for the Congregational Chapter which will be celebrated in August-September 2022.

Initially the gatherings took place locally at Villa Assumpta. But it also became possible to introduce the Sisters to virtual gatherings which meant that they could engage in intra-Congregational group sessions, and indeed also in a couple of Congregational events which each time strove to involve as many Sisters as possible.

The retired Sisters resident at Villa Assumpta were involved in their active years in different forms of Mission and in various ministries. Among those Sisters resident currently at Villa Assumpta there are former matrons of hospitals and clinic nurses, principals of schools and teachers, as well as Sisters who did youth work, ran retreat centres, worked as pastoral assistants in parishes, provided gardening and domestic services. Today they perform a ministry of prayer and support to those involved in active ministry.

Several Sisters died at Villa Assumpta during 2020 and 2021. When it was possible, a funeral Mass was celebrated among the Sisters and some time later the ashes of the Sisters concerned were interred in the grounds.

In a couple of cases, a memorial service was held as soon as possible after the death of the Sister with a funeral Mass and interment following later. In earlier years it was possible to bury all our Sisters at Oakford; in more recent years the practice has come to be cremation followed by interment at Villa Assumpta.