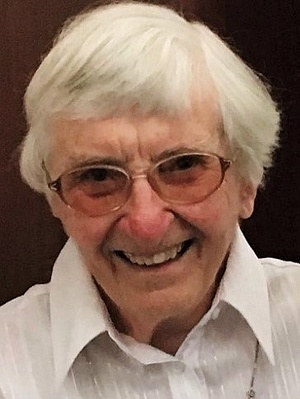 I am confident of this, that the one who began a good work among you
will bring it to completion by the day of Jesus Christ.
(Phil 1:6)

Ursula Hedwig Runne was born on 4 November 1930 in Worms, in the diocese of Mainz. She completed high school in Germany in 1950 and became a postulant in Neustadt in October 1950.

She wanted to become a missionary, and, following one of her brothers, Burkhard, who had become a Dominican (and later a friend for many years of the Sisters), she felt attracted to Neustadt.

Becoming a Dominican was not unexpected: Sr. Hildegunde had been a member of the Dominican parish of St Paulus and her mother was a Dominican tertiary. Just nine months later Sr Hildegunde was on her way to Oakford where she completed her novitiate and made profession on 9 July 1952.

In 2018 Sr Hildegunde retired to Villa Assumpta in Pietermaritzburg. When asked why she had remained a religious she said, ”I found what I had been looking for.” This sense of contentment and fulfilment was felt by all who met her or lived with her.

May she now enjoy the peace and love of God whose call she answered so faithfully and generously.

Read more in the obituary and read here a special tribute to Sr Hildegund.