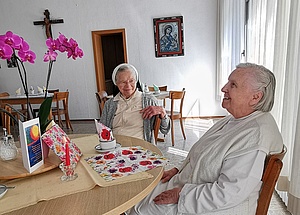 Sr Mellita celebrate her birthday at the convent at Neustadt 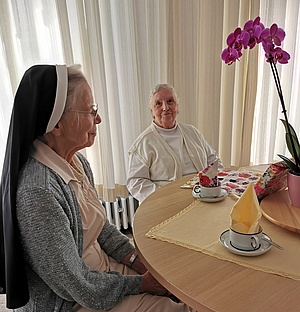 Sr Melitta is in good health and keeps active 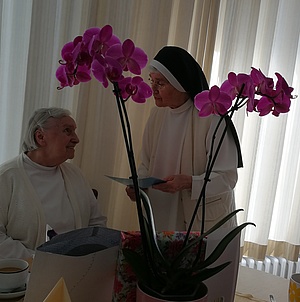 The timely easing of the Corona-related restrictions brought quite an unexpected birthday present to Sr Mellita Wolf OP, who, on 27 April 2021, could look back with gratitude on 90 full and eventful years of life.

As the Sisters from Neustadt could not celebrate her birthday at the Caritas Senior Centre St Martin in Lohr, Sr Mellita was invited (as a fully vaccinated person) to visit the convent at Neustadt and celebrate there with the Sisters.

Sr Mellita was born in Hausen near Aschaffenburg, where she grew up during the War as the eldest of three siblings and where she attended school. She entered our Congregation in Neustadt in 1950 and made her First Profession in April 1952.

For the first few years, she worked in housekeeping in our girls' hostel in Frankfurt, before leaving for California as a pioneer in 1955. At that time there were many young friars living at St. Albert’s, the House of Studies for the Dominican Fathers in Oakland. A small community of our sisters saw to the housekeeping activities.

Sr. Mellita worked there until 1973, before she was sent out again as a pioneer to the new foundation in 25 de Mayo/Argentina in 1974 after a one-year study period in Rome. She was in charge of catechesis in the parish until 1979. As our community grew, another convent was established in Oberá, where Sr Mellita assisted in a home for the elderly until her return to Germany. She still maintains contacts with Argentina today.

In Flörsheim, she was entrusted with the management of the bed control centre for another 10 years, before she took over gate duty and the care of guests in Diessen from 2002. Since 2018,

Sr Mellita has spent her twilight years at the Caritas Senior Centre St Martin in Lohr. She is in good health and keeps active by assisting in the laundry, folding the freshly ironed items. With her cheerful and easy-going nature, she always has a kindly word for her fellow residents.

It was a great joy to be able to celebrate her birthday with Sister Mellita. Our wish for her is that she - safe in God's hand - may live many more happy days.