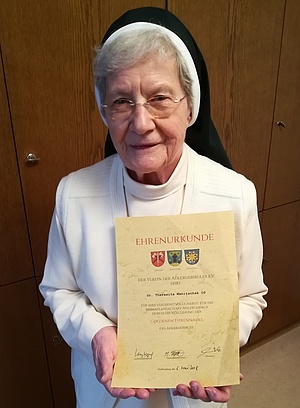 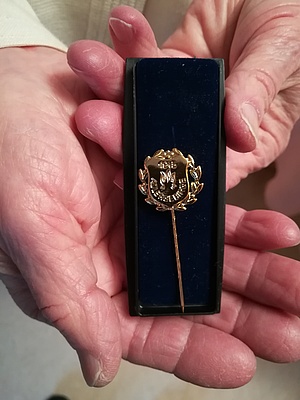 The Eagle Mountains (Orlické Mountains) are located in the former German-speaking area of Bohemia, the Sudetenland, approximately 180 km east of Prague (capital of the Czech Republic). The territory of the Eagle Mountains consists of the three districts of the Upper Eagle Mountains, Grulicher Ländchen and Friesetal.

The "Adlergebirgler Association" was set up to look after the Germans of the eastern territories who were expelled from their centuries-old homeland after the Second World War. The purpose of the association, based in Waldkraiburg (Bavaria), is to preserve the local literature, language and customs.  It also offers cultural support of the displaced persons in their new home and organises help and interchange with each other.

The award of the badge of honour and the certificate should have taken place in a fitting ceremony. Unfortunately, this had to be cancelled this year due to the coronavirus pandemic, and so Sr Theresita received this special award by post.

With this award, those responsible for the association recognised Sr Theresita's long-term commitment to the association. For example, Sr Theresita helped to organise the thanksgiving service on the 300th anniversary of the homeland pilgrimage site "Muttergottesberg" near Grulich in 2000, which Dominik Duka OP, former bishop of the Königgrätz diocese (today cardinal and archbishop of Prague), celebrated with six concelebrants, and prepared the thanksgiving devotions.

Sr Theresita has been the local representative for the four home communities: Wichstadtl, Petersdorf, Wöllsdorf and Zöllnei since 2006.  She keeps contact with the former residents of these communities and the subsequent generations. Over many years, she has created an extensive archive with names, contact details, birthdays and other special days. Sister receives a lot of news from her former homeland and reports for the magazine "Mei Heemt", which is sent out to the displaced persons every quarter, informing them about their former homeland. “The mayor of my home town Wichstadtl appreciates it,” says Sr. Theresita. Her work is very time-consuming, but important for the people who had to leave their homes after the Second World War practically overnight and who had some bad experiences.

Sr. Theresita was born in Wichstadtl in the Eagle Mountains and, on 2 June 1945, at the age of twelve, had to leave house and home with her mother within half an hour. In the church of “St John the Baptist ” in the home parish of  Wichstadtl, a memorial plaque with the names of all those who died in the two world wars was installed in 2018 and blessed in 2019 at a festive church service.

Sr. Theresita's great hope is that through contact with the current residents of her hometown Wichstadtl, crimes and misunderstandings of the past can be dealt with through mutual forgiveness and that dignity and mutual recognition of both ethnic groups enable a peaceful coexistence in a united Europe.