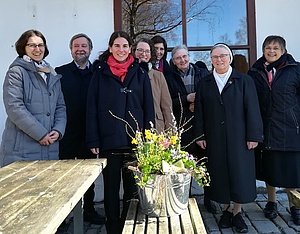 Farewell and new beginnings in Dießen 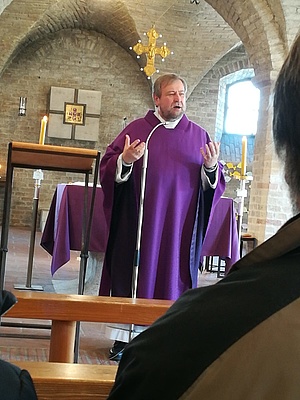 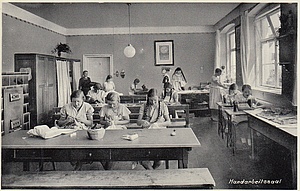 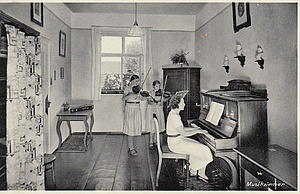 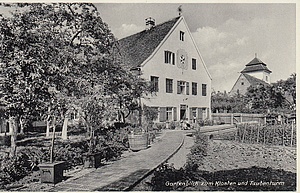 In 1854, the "Royal Government of Upper Bavaria" made an official request to the Dominican Sisters of Landsberg to send Sisters to set up a girls' school in Dießen. This request was supported by the district official Karl von Nagel and the local parish priest, Fr Atterer. After consultation and planning, the first convent for the Sisters was set up in the so-called "prelate house". The Sisters of Landsberg bought the house as a branch of their convent, but alterations were necessary to accommodate rooms for the school and kindergarten.

In 1867, classes started in the elementary school for girls

In 1867, three Sisters started teaching girls in the elementary school. More Sisters arrived to teach separate handicraft lessons and for the kindergarten. In 1895, the branch convent became an independent convent: the "Dominican Convent St. Joseph Dießen".

Further developments included a commercial continuation school and a girls' boarding house for learners from the surrounding area. The Sisters responded to the diverse requests for women's education by opening a sewing room, and an embroidery and paraments workshop. The Sisters were master crafts women and trained apprentices in these professions.

Sisters were involved wherever a need called them

The Sisters ran a sewing school and a domestic science school in Dießen and Utting. They also worked in many ways pastorally, socially and culturally. They got involved wherever there was a need to alleviate suffering and to help unobtrusively.

Special mention should be made of the honorary citizen of Dießen, Sr. Aquinata Schnurrer, known as a local researcher and author.

In 1950 - again at the suggestion of the state government - a three-level, state-recognized secondary school for girls was established. The first headmistress of the school was Sr. Aquinata Schnurrer, followed in 1953 by Sr. Gertrudis Sigllechner.

The development of the school progressed rapidly; the request for admission to the school was high. Soon it became necessary to expand the buildings to accommodate the expansion to a four-level secondary school. The Convent then decided to create room for the further development of the school into a six-level secondary school by erecting a new building elsewhere. The move to Rotterstr. 8b (Klosterhof 7) took place in 1993.

Over the years, the community of Sisters has sought to provide young people with sound and solid training based on Christian values ​​and the effort to develop young people in an age-appropriate way in community skills and social responsibility. Sr Gabriele Wolf, headmistress until 2007, was the last Sister to be in charge of the school.

Thankfully, the “Schulwerk” of the Diocese of Augsburg took over the school in 2003. The school continues to uphold the values inspired by the Sisters. For this, we are very grateful to the school management, especially the headmistress, Ms. Theresia Wilhelm, the teaching staff, and the school's support association as well as Mr. and Mrs. Sattler.

We look back gratefully, but not without sadness and sorrow at leave-taking

Because of the aging and diminishment in the number of the Sisters, but also due to financial restraints, we had to close our convent in Dießen at the end of 2019. The last Sisters who lived at the convent (almost all 80 years and older) needed new forms of care and support. These are available in our provincial house in Neustadt am Main. Some Sisters are in need of special care, which they receive at the nearby Caritas-Seniorenzentrum St. Martin in Lohr am Main.

With grateful hearts as well as with sadness, we look back on our 170 years of life and work as Dominican Sisters in Dießen.

Many Sisters have contributed their services over the past 170 years, though it is impossible to do justice to them all in this brief description. They have lived out the Dominican commitment to holistic education and the pursuit of truth (Veritas). This they have done in the spirit of our Dominican motto "Laudare - benedicere - praedicare", which means "to praise, to bless, to preach" through word and action.

On 8 March, Sr. Christiane Sartorius, Sr. Irmengard Götte and Sr. Dagmar Fasel - as representatives of the Oakford Dominican Sisters – took part in the Farewell Mass of Thanksgiving at the parish church of St. Stephan in Diessen.  Sr. Irmengard is the only "original" Dießen sister still living; she entered the Congregation there and lived in Dießen for almost 55 years with few interruptions. The parish priest, Fr Josef Kirchensteiner, held the thanksgiving service in St. Stephan. He paid tribute to the work of the Dominican Sisters and thanked them sincerely for their beneficial work in Dießen.

Recently, a new spiritual community has taken over the Convent of St. Josef: the Catholic Secular Institute "Cruzadas de Santa Maria". This religious women's community was founded in Spain in 1971 and reports directly to the Pope in Rome. Three women now live in the convent of St. Joseph.

The community will use the convent for families and young people who want to experience faith in community. The members of the "Cruzadas de Santa Maria" want to live a consecrated life in the middle of the world. The members live in small communities and usually pursue their professional life. Their main focus is on education.