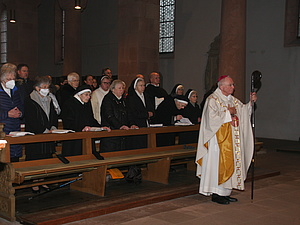 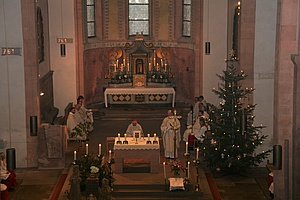 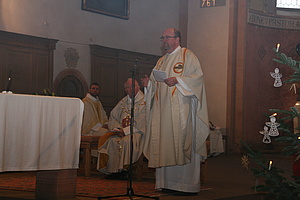 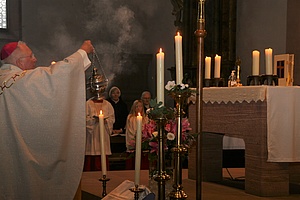 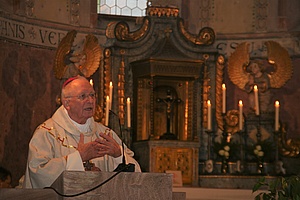 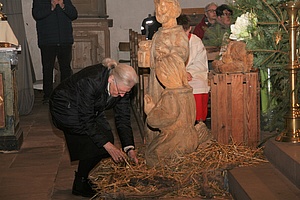 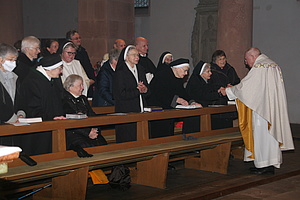 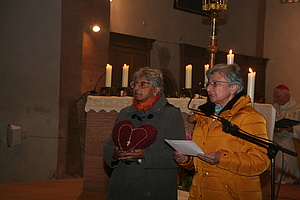 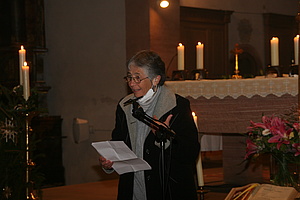 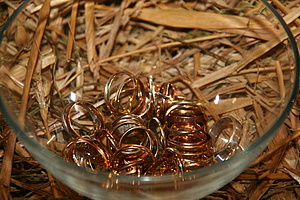 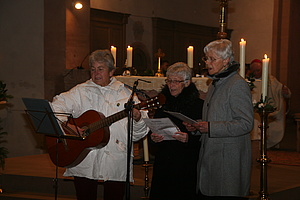 With a Pontifical Mass in the Abbey Church of St. Michael and St. Gertraud, the Dominican Sisters of Neustadt were bidden farewell on Epiphany.

It was a very special Mass in the Abbey Church of St. Michael and St. Gertraud in Neustadt on January 6 with which the Dominican Sisters of St. Catherine of Siena of Oakford/Natal were bidden farewell on the Solemnity "Epiphany of the Lord".

A moving service and heartfelt thanksgiving

Many people connected with the Sisters came, there was laughter, there was clapping but also tears in the Neustadt parish church during the two-hour High Mass and the many heartfelt words of greeting and thanksgiving that followed.

"It's easy to say thank you but hard to say goodbye," said Father Sven Johannsen, who is affiliated with the Neustadt Dominican Sisters. For more than 1250 years, Neustadt has been marked by spiritual life and activity. Johannsen described Neustadt as one of the "spiritual nuclei of the diocese of Würzburg." "They have shaped this place, cultivated friendships and relationships in the parishes, cared for this church, fertilized the spiritual life. It probably hurts us who stay behind as much as it hurts you who are leaving now."

Sister Dagmar entertainingly told the story of the Dominican Sisters

Yes, the Missionary Dominican Sisters did, coming to a place with a rich tradition in 1909. Sister Dagmar Fasel OP took those attending the service on an interesting and entertaining journey through the turbulent history of the convent.

"Neustadt was a place of gathering and mission," she said, reporting that beginning in 1910, 405 Sisters entered the order at the St. Joseph Mission House in Neustadt. "They came from all German regions and. neighboring European countries, 123 Sisters came from the diocese of Würzburg." In the period from 1910, 294 Sisters were sent out from Neustadt to the mission territories of South Africa and Argentina, 27 Sisters were sent to England and 21 Sisters to California (USA). And now the 13 Sisters from the Mission House of St. Joseph in Neustadt are sent out to the senior citizens' residence in Kist to live their apostolate there.

The Sisters put gold, frankincense and myrrh in the manger

It is part of the tradition of the Dominican Sisters not to be bound to fixed places or convents, said Sister Dagmar. Together with Sister Marie-Christopher Wehner OP, she placed golden professed rings, frankincense and myrrh in front of the Christ child in the manger as a symbol of the gifts of the stargazers - the Sisters' rings for their readiness to proclaim the Gospel and as a witness to life in community, frankincense as a symbol of prayer and praise to God, myrrh as a remedy and sign of transience.

"God's ways are different than we plan and think"

"It is necessary not to complain in this hour. It is necessary to say thank you," said Auxiliary Bishop Ulrich Boom, who celebrated the pontifical Mass. He said that many people had received support and orientation through the Missionary Dominican Sisters. The Solemnity of the Epiphany is a day of encouragement, said the Auxiliary Bishop in his homily, because already "the astrologers were allowed to learn on their way and had to learn that God's ways are different than we plan and think," he said. "You have done great things in the past here in Neustadt. Why shouldn't this be Great, which is now at hand?" the Auxiliary Bishop offered. "Have confidence in the one who does not rely, as we so often do, on what we do in our heads in our pockets, but on the heart."

"Our Sisters have been companions to us through their prayers, conversations and attention to our life situations," the special intercessions of the women from the community showed.

"Thank you for your incredible generosity and faithfulness to our Sisters"

Congregational Prioress Sister Paula-Mary van der Walt OP thanked all supporters of the convent "for your incredible generosity and faithfulness for our Sisters and the mission". Without it, it would have been impossible for the Sisters to carry out their service to the people. "The time has now come for our Sisters to continue their life journey in a new space, a new place and a new time. As we leave St. Joseph Mission House in Neustadt, we keep you in our hearts and promise to support you in prayer," she said with her hand on her heart.

"We leave with a weeping heart, grateful for all the good we have experienced in this place," said Sister Christiane Sartorius OP Provincial Prioress for Germany. But, she said, the situation in the Church and society has changed. Just as Abraham followed God's instruction, the Sisters now follow the star, if not voluntarily, then willingly. "We leave with the grateful certainty that nothing was in vain, that Neustadt and the people here were home to us and carried us."

"In thought and prayer we remain united"

"Deeply moved by so many good words of appreciation, we say Vergelts Gott from the bottom of our hearts," said Prioress Sister Hilke Stenner OP on behalf of the departing Sisters. "Despite the inner pain, we feel an inner energy to live and rediscover our charism as Dominican Sisters even in our increasing age. With the beneficial gifts of today's service, we leave for Kist richly endowed with our new mission."

On behalf of the parish community, three women from Neustadt expressed their heartfelt thanks with the song "Your word is like a ray of light" for the good togetherness on the journey together. "We miss you in Neustadt and Erlach, but in thought and prayer we remain united."

"We will miss the Sisters in Neustadt," said Peter Gowor, commander of the Neustadt Fire Department. As a member of the Neustadt City Council, he brought greetings from Mayor Stephan Morgenroth and added his own. He recounted that for many years, the Neustad firefighters had driven the seniors, as well as the Sisters, up to the Aurora forester's lodge in the summer for a get-together. "It was always nice when we brought you back to the convent. and they got off the bus happy and satisfied," he said, visibly moved, addressing the Sisters and offering to pick them up in Kist in the future, to drive them "out of the Aurora" and also to bring them safely home again to the senior citizens' residence.

As a reminder: a photo of the convent embedded in the community

"The convent is the nucleus of spiritual and ecclesiastical life in our region," said Rudolf Madre, who said farewell to the Sisters as parish council president. "The convent and its Sisters have always been an enrichment and a blessing to our parish. Thank you for the many services and support you have given us and our parish." As a memento of Neustadt, the Sisters received a picture of the convent embedded in the community. An album of souvenir photos and greetings from Neustadt and Erlach residents is in the works, Madre said.

"Until we meet again, God hold you firmly in the palm of his hand"

Although she had wrapped her words of thanks in a whimsical speech, it was also apparent to Helene Brehm, the church administrator of Erlach-St. John the Baptist, how difficult it was for her to say goodbye. As a child, she said, the path to her grandparents always led her through the convent courtyard, and her mother knew all the Sisters by name. "They were one big family, that's how I felt," she said. The footprint left by the Sisters in Neustadt is large, she said. "We will miss many good conversations, smiles, the encounters and the openness to the world of the sisters. We wish you to find a new home in Kist and until we meet again, God hold you firmly in his hand."

The service was musically accompanied by the Kantorei Sankt Michael and Deanery Cantor Alfons Meusert on the organ.