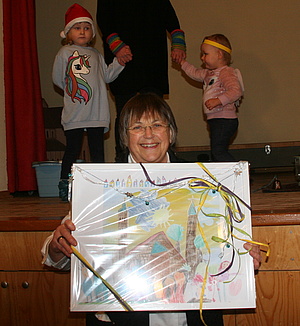 Sr. Christiane with the children's picture 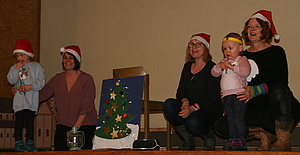 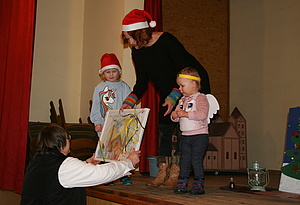 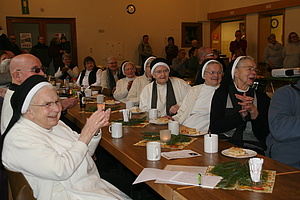 Sisters enjoyed the afternoon in the parish hall 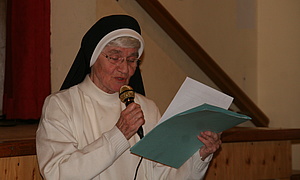 Sr. Hilke thanked everyone for the appreciation 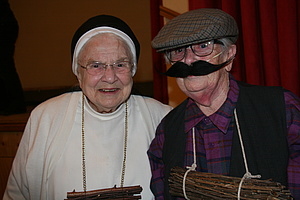 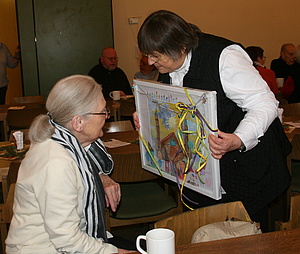 Sr. Dagmar and Sr. Christiane admire the work of art

The parish team and the church administration of St. Michael and St. Gertraud had invited to the farewell meeting in the parish hall in Neustadt (Germany).

"Thank you very much for the beautiful afternoon here with all of you. We feel that it is very important to you to give us such a beautiful and good sign of appreciation," with these words Sr. Hilke thanked everyone who thanked the sisters on the fourth Sunday of Advent with very personal moments for their time in Neustadt.

The parish team and the members of the church administration of St. Michael and St. Gertraud had invited to the farewell meeting in the parish hall in Neustadt. All the sisters, who will leave the convent of St. Joseph in Neustadt at the beginning of the new year and move to their new domicile, the senior citizens' residence in Kist, came to the parish hall and spent a few pleasant hours together with people from Neustadt and Erlach.

With the departure of the sisters, a time steeped in history comes to an end

Of course, some tears were shed. After all, with the departure of the sisters, a time steeped in history comes to an end. Since 1909, the Missionary Dominican Sisters have continued the monastic tradition in Neustadt. Many of the sisters were firmly rooted in the parish.

The people of Neustadt and Erlach showed them how much they were valued on Sunday, December 18, 2022 at an Advent afternoon in the Neustadt parish hall. The children of St. Martin's Kindergarten had specially rehearsed a Secret Santa dance for the occasion, but not all of them were able to perform it due to illness. Two kindergarten children were healthy and offered - together with the teachers - a beautiful performance with a Christmas tree, stars, lights and a Secret Santa dance to the audience in the parish hall.

Kindergarten children created a picture for the sisters

They expressed their gratitude for the kind words of the Sisters during the walk through the convent courtyard. They thanked the Sisters for allowing them to look at the beautiful nativity scene in the convent each year, and of course, they were treated to cookies. They thanked the Sisters for closing the annual St. Martin's procession, which led the little ones steadily into the convent courtyard. All together they created a picture for the sisters, which will remind them of Neustadt also in their new domicile and which they presented to Sr. Christiane.

Sybille Grübel took those present on a pictorial journey through monastic times in Neustadt from 1909 to the present. The historical and current photos evoked memories in many people, and some rummaged deeply in their memories during the entertaining stories. Thus one or the other story came to light.

Of course, there was also time for exchange with each other. This was the main point of the farewell meeting in the parish hall, to talk to each other, to exchange ideas and to be able to say goodbye.

The "Näuschter Wallekipper" (in the person of Helga Heidenfelder) told in rhymes and entertainingly about the life and work of the Sisters in Neustadt. He told, among other things, about Sr. Demetria, the garden sister, who was often on the road with the tractor and managed the former kitchen garden of the sisters and took care with devotion of everything that was green and blooming.

Sr. Liboria was presented with the Näuschter Walle by the Wallekipper. Among other things, she had played the organ in the church since 1975 and also directed the Neustadt church choir for 17 years.

They all go with heavy hearts

They all leave with heavy hearts. "It hurts, of course, when the sisters leave Neustadt," says Sr. Dagmar. And, of course, the sisters did not make the decision easily. But in everything, the concern for the sisters was and still is in the foreground. The 13 sisters who are moving from Neustadt to the senior residence in Kist will be able to live there together in a community. And they will receive - if necessary - the care they then need.

"It characterizes our order that we do not tie ourselves down to one place, but are on the way to new tasks and to enable others to take them on," says Sr. Dagmar. "Accepting the challenge of the times requires change and sometimes giving something up."