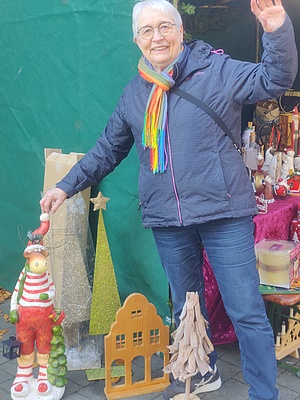 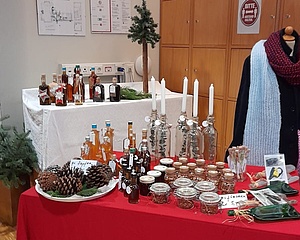 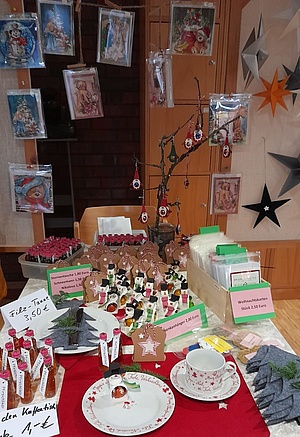 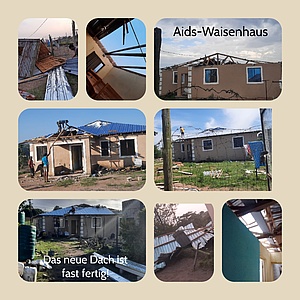 For many years now, the women of the Mission Committee of the parish of St. Anthony in Rheine (North Rhine-Westphalia) have been supporting our work in Ekukhanyeni in South Africa with the proceeds from their traditional Mission Bazaar.

This year, the Mission Committee of St. Anthony's Parish in Rheine (North Rhine-Westphalia) once again held a Mission Bazaar.

In bright sunshine and "crisp" minus temperatures, it took place in and in front of the Basilica Forum.

The visitors were delighted with a lovingly designed bazaar with many decorative items, sewn and knitted, Advent arrangements, items from beekeeping, woodwork, freshly baked cookies, juices and liqueurs, jams, applesauce and much more. All booths, whether outside or inside, were very well attended.

Outside in front of the Forum, the altar boys offered bratwurst, cocoa and mulled wine. At the stand "Weihnachtströdel" one could browse to one's heart's content, and in the Antonius Café one could enjoy cakes and tarts.

Volunteers had spent many months crafting, cooking, tailoring, knitting and decorating with love. The Mission Committee donated the proceeds of the bazaar to the Aids Hospice and Aids Orphanage of the Dominican Sisters in Ekukhanyeni in South Africa.

The AIDS center in Ekukhanyeni has been in operation since 2009, providing inpatient and outpatient services. It is an important place of refuge in the "Valley of a Thousand Hills" with its widely scattered settlements and often hard-to-reach huts and kraals.

During the summer Magdalene Wolters and Brigitte Wenker were able to visit the mission station. They came back with unforgettable and unique impressions. South Africa suffered from an extremely strict lockdown during the Corona pandemic. People were not allowed to leave their houses and huts. Day laborers could not work, which meant that many families suffered from hunger. Schools were closed throughout the country, which meant that school lunches for the children were also cancelled.

Then, in April, a new shock. Violent storms and heavy rain destroyed an entire province. The mission station was also affected. Trees uprooted, fell on the roof and also destroyed the cistern. There is still no water. Several times a week, large tankers come to the mission station on gravel roads and bring water.

Another problem is electricity in South Africa. Since there is too little of it, the electricity is regularly cut off. Only the hospice has an emergency generator; the convent and all outbuildings remain dark.

The staff from the Mission Committee had firsthand experience of this. In October, the entire roof of the AIDS orphanage was covered by a hurricane. A disaster for "Mother Tracy" and 15 children, the youngest barely four years old. They had to live in their house, which was actually uninhabitable, for several days until a new roof was made.

Magdalene Wolters has been involved for many years - thank you for that!

Magdalene Wolters has been very involved with the facilities of the Dominican Sisters of St. Catherine of Siena of Oakford/Natal for many years. She says she discovered her love for South Africa during her stay at the Oakford Priory mission station from the beginning of 1981 to the end of 1983. Since then, she has arranged sponsorships that have helped hundreds of children.

Sr. Natalie thanked on behalf of the Dominican Sisters

Sr. Natalie expressed her gratitude on behalf of the Dominican Sisters for the incredible support: "We are very happy and grateful for the large proceeds of the bazaar. In the Sisters' Circle we have been thinking about what we want to use the money for.

We urgently need a new generator for the Aids hospice. The current one is no longer fully reliable. Since South Africa does not produce enough electricity, we have regular power outages, sometimes several times a day. At the mission station it is then dark. In the monastery we can live with candles and flashlights, but the AIDS hospice is in urgent need of electricity. We would also like to renew the stove and cabinets (so far only pressed cardboard) in the hospice kitchen.

A matter close to our hearts is Kethiwe's family. Kethiwe, a young woman, was dying in our hospice. She desperately wanted to visit her family again and died at home. Shortly after, her mother came and asked for food. Sister Anna Rose visited the family and was shocked by the broken round hut in which 10 people live. We would now like to build a small cottage with two rooms for the extended family. Dear staff, dear congregation, in the name of the sisters, the patients and the extended family we would like to thank you for your great support. In prayer we are always united with you."