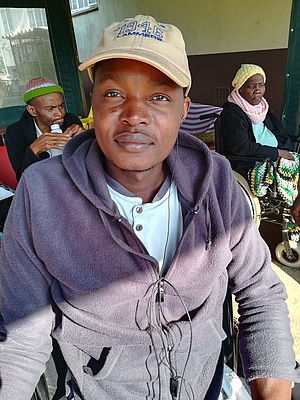 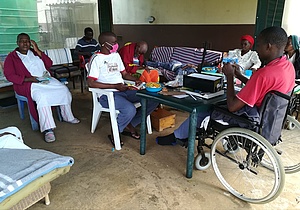 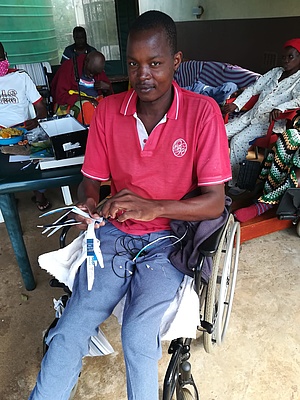 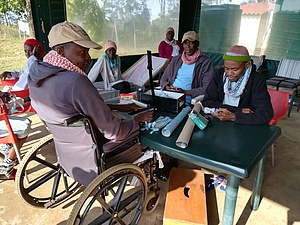 On 15th April 2022, a Mozambican 31 year old man, Alfredo (is not his real name) was referred by the Osindisweni Hospital to the Ekukhanyeni Aids Centre run by the Oakford-Dominican Sisters.
Luckily for him, the Dominican Sisters took care of him, didn't give up and supported him in such a way that four months later he was able to return home to his family in Mozambique.

Alfredo is originally from Inhambane, Mozambique. He is married and has two children: a ten-year-old girl and a four-year-old boy.

In February 2022, he arrived in South Africa looking for employment. He found a casual job cutting trees in Tongaat, KwaZulu Natal. He only worked a few days, when unfortunately, at work a tree fell on him. His employer, a Zulu man, was with him.

During a work assignment, Alfredo was seriously injured

The employer was so shocked on seeing Alfredo under the tree asking for help, he couldn’t react. Finally, another Mozambican colleague arrived and cut the tree releasing Alfredo. He was badly injured and could no longer stand. He had no feelings in his legs and his back was broken.

They helped him to get to Osindisweni hospital where he was admitted. After a few days he was referred to another hospital in Durban where he underwent a spinal operation. After the operation Alfredo was relieved from the excruciating pain in his back. The doctors realized he would never be able to walk again.

He was referred back to Osindisweni Hospital. During his stay he developed bed sores. The doctors thought there was nothing else medically they could do for him and they wanted to discharge him. Alfredo begged the doctors to be allowed to remain at the hospital as he has no family in South Africa and nobody to look after him.

The Social worker was contacted and decided to refer Alfredo to the Ekukhanyeni Aids centre. There he received loving care and in a short time the bed sores were healed. The physiotherapist visited once a month and Alfredo continued recovering. He began to recover some feeling in his legs.

At Ekukhanyeni Aids Centre Sr. Natalie does occupational therapy with the patients and teaches them arts and crafts.Alfredo was eager to learn whatever was offered to him. They embarked on making stars out of paper for Christmas tree decorations and small boxes for gifts. He did this with such dedication and joy that his work was very high quality.

Because of his accident and the long time in hospital and the Aids Centre, his visa had expired and he was unable to renew it, because of his condition.

Sr. Lidia helped to get Alfredo's paperwork renewed for the journey home

Sr. Lidia contacted the High Commission of the Mozambican Consulate in Durban. She informed them of the situation, and they offered to come and visit Alfredo. Not only once but three times.
They renewed all his documentation for travelling back to Mozambique free of charge, and the Oakford Dominican Sisters (Mission fund) paid the cost of the flight back home. This was the only means of travel possible for him.

The airline required someone to accompany him, as he was unable to support himself, and a member of the Consulate actually accompanied him to Mozambique. They travelled on 17th August 2022.
His family was awaiting him on his arrival, and they were overjoyed to welcome him back.

Alfredo is back home and teaching occupational therapy at school

The local school where his children are being educated invited him to teach the learners the skills that he had learned in Ekukhanyeni, and this provided employment for him which supported his family.
We never know the impact the work we do has on the lives of our patients at our Aids Centre! Alfredo's story showed us how tortuous the paths are and how everything falls into place when a real little stone starts rolling.