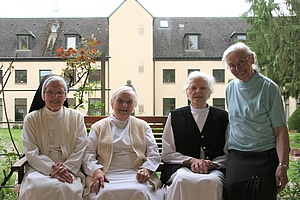 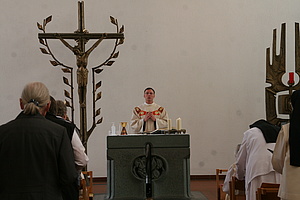 Father Andreas Iwanicki from Mariabuchen at the celebration of the Eucharist 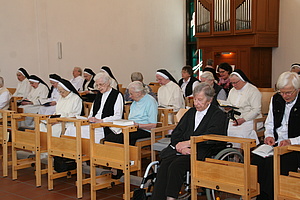 The sisters in the convent chapel 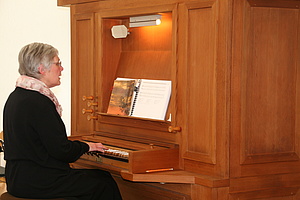 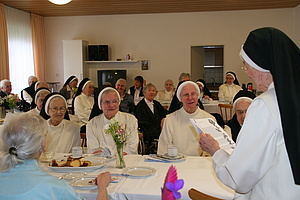 Sr Hilke congratulated the jubilarians with a short tribute 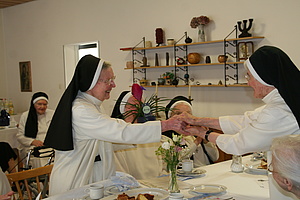 A heartfelt thank you and flowers for Sr Antonia... 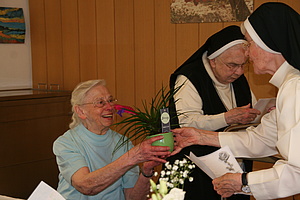 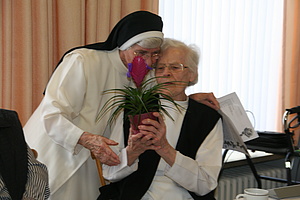 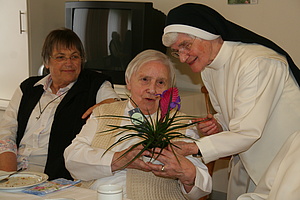 On 3 May 2022, four of our sisters celebrated their anniversary of religious profession. After a long time in which we were not allowed to see each other in person due to corona, all the sisters were happy to finally sit together again at the festively laid table and exchange ideas. They had all missed so much meeting each other.

All the Jubilarians had come to Neustadt

The jubilarians had all come to Neustadt. Sr Mellita Wolf OP celebrated her 70th jubilee of religious profession, her actual jubilee day was on 30 April 2022. Our sisters Antonia Grawe OP, Thelma Schwind OP and Ildefonsa Grätz OP celebrated their 65th anniversary on 3 May 2022. They were all in good health and happy to be in Neustadt. Sr Antonia still lives in the convent at Neustadt. Sr Ildefonsa and Sr Mellita have been living in the Caritas Senior Centre St Martin in Lohr since 2018 and Sr Thelma recently moved into assisted living on the former brewery site in Lohr.

"You gave yourselves body and soul in the various apostolates"

On the feast day of the Apostles Philip and James, we celebrated the Eucharist with Fr Andreas Iwanicki from Mariabuchen in the convent chapel in Neustadt. Sr Anna-Lucia accompanied the celebration of the Eucharist on the organ.

Sr Hilke, Prioress, greeted the jubilarians in Neustadt: “Yours has been a long time of faithfulness to the Lord and to the people to whom you were sent, not only within Germany, but also in South Africa, America and Argentina. In various apostolates, you have committed yourselves with body and soul, you have experienced joy and sorrow and in everything, you have felt and lived your Dominican calling. Today we want to celebrate your life and give thanks together in the Eucharist."

Afterwards everyone met in the celebration hall of the convent for coffee and conversations. With obvious delight and happiness, the sisters met and talked together again in person.

Flowers for the jubilarians

Sr Hilke had written a tribute for each jubilarian, which she read out. In a funny way she briefly told the story of the life and work of the Sisters and presented them with a beautiful floral greeting.

Please also read the detailed articles on the profession anniversaries of: