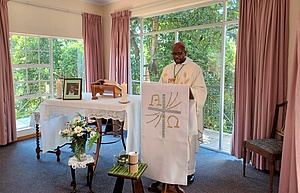 Archbishop Zolile Mpambani, of Bloemfontein at the mass 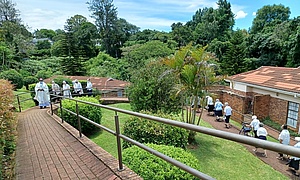 On the way to the burial 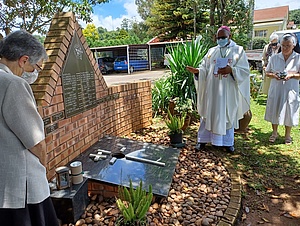 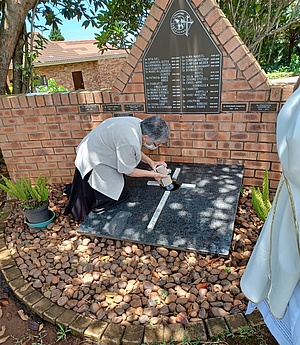 Sr. Paula-Mary van der Walt OP performed the interment of Sr. Claretta's ashes in the ground beneath the memorial wall.

Archbishop Zolile Mpambani, of Bloemfontein, a friend of Sr Claretta Mthalane OP since their meeting at St Anselm’s in England in 1993, presided at the celebration of the Eucharist preceding the interment of her ashes at Villa Assumpta on 15 January 2022. Sr Claretta died on 12. December at the age of 77.

Archbishop Zolile Mpambani, of Bloemfontein said his own farewall to Sr. Claretta

The archbishop had not been able to attend her requiem Mass but was grateful to say his own farewell to Sr Claretta. He spoke of the compassion he had received from her in 1993 when his brother died and he had had to return to South Africa instead of proceeding to Germany for some time of study.

In his homily the archbishop referred to the hymn which reminds us how we come to God through one another, seeking wholeness and imploring God to lay hands on us. The theme of forthcoming synod on synodality also reminds us of the journey we are on to experience the Kingdom in its fullness. While Sr Claretta now experiences the beatific vision, we continue to discern God’s will for ourselves, each with our own mission actively to do good, and not simply to refrain from doing evil.

“Never should we compare ourselves with others"

“Never,” said the archbishop, “should we compare ourselves with others, but always with God so that we become compassionate as God is compassionate. Our Christian conduct makes us like God. God rains his compassion on the just and the unjust.” We are all called to give and have gifts given us, to be loving and merciful to all.

Sr Paula-Mary performed the final interment of Sr Claretta’s ashes beneath the wall of remembrance, ending a joyful and dignified celebration of the Eucharist.