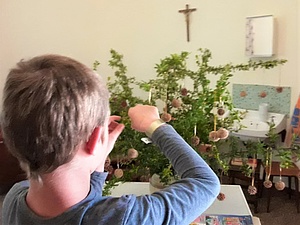 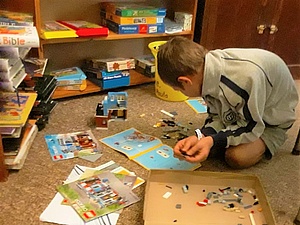 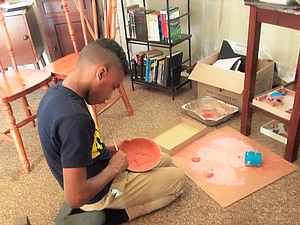 Sr. Paula Hinxlage OP supports troubled boys and offers them an open ear and a space in which they can feel safe.

Sr Paula Hinxlage may have retired at least twice already, but that has not stopped her from reaching out as a volunteer to assist troubled boys who are resident at Girls and Boys Town, Magaliesburg, South Africa.  The Magaliesburg campus accommodates only boys.  Staff provide social work and counselling services and sports activities, and the boys attend regular classes at mainstream schools as far as possible.

Sr Paula readily acknowledges the difference working with the boys has made in her own life.  When she was first assigned by the Congregational Leadership to Magaliesburg it was not easy for her to put her foot in the door with regard to volunteering her services to work with the boys. Times are different now, and the current staff welcome the contribution she makes as an older person to the overall well-being of the boys in their care.

At first, she became involved with some hours of study supervision for the boys.  Now in a new phase she provides a safe space for up to three boys at a time to work on a jigsaw puzzle, to construct something with Lego, to make something in clay, to decorate a Christmas tree, to delve into her library, to play different board and memory games or cards, to speak to her about their families.  Her methodology is to find out what the boys like to do when they spend time with her in a room made available by her Dominican Sisters for her work. The boys can do anything in which they are interested when they drop by in her room as long as it is not destructive. The open door indicates that she is available!

The boys have all been referred to Girls and Boys Town, a place of safety, through Social Services because of their experiences in impoverished and destructive backgrounds.  They are placed in this setting for their own protection when there is no caregiver at home.They are vulnerable, some of them on medication to help address psychiatric and psychological issues.  They have often experienced violence, rejection and abuse in their original surroundings.  A few have themselves been involved in very destructive activities.  Some have escaped the threat of being killed or injured and seen family members being shot and killed.

Even though it is the usual practice not to place more than two or three boys per local school, they sometimes continue to be stigmatised simply because of where they live.  From this perspective, the system continues to work against them. “Yet”, says Sr Paula, “they are in their own way survivors, and when they feel it is necessary they continue to fight the system, whether good or bad, fearing nothing.  Walking on the roof, catching snakes, dealing in drugs, stealing.  And yet when their leadership qualities are channelled in positive ways they can be of help to and accommodating of others. Some are involved in theft to obtain money for drugs.  Some have been expelled from school.  One is currently in a juvenile prison, another died on the street after a drug overdose.  There are so many heart-wrenching stories in these children because of the hand life has dealt them.”

Despite the challenges there are also good news stories, even if the results don’t show till later on.  Former Boys Town boys have found successful employment and some run their own business. One of the current boys has become an avid reader because of Sr Paula’s library and has great career aspirations once he leaves school. Another boy passed his exams because of the extra help he received from her despite the prediction that he would fail.  Some boys are able to visit some of their biological family members, others are in foster care.

As was the case all over the country regular schooling was severely challenged by the Covid pandemic.  For many months there was no school attendance allowed because of the Covid restrictions.  When schools did open, restrictions around social and physical distancing in the classrooms meant that the boys attended school on alternate days or just several times a week instead of daily.  Despite their having to spend time on their studies away from school, in reality it did mean that the boys had more time on their own, not all of it adequately supervised and structured. Educational authorities and child psychologists globally have raised the alarm about the reality of the effects of the Covid restrictions on education and mental health in children.

“It’s impossible to change the system”, says Sr Paula, “but I can help individuals.  I see their struggles, not always the successes.”

For some time before getting involved in Girls and Boys Town, she worked as a volunteer at a local primary school in Magaliesburg assisting learners struggling with reading.  One of Sr Paula’s past students at St Xavier’s school in KwaZulu Natal where she had spent her teaching years made good on a promise he had made her many times to assist her in whatever way he could: he provided a mobile classroom, comprised of two rooms, to the local primary school.  One of these she used for some years for her remedial work with the students, discontinuing only when Covid lockdown restrictions put a stop to it.