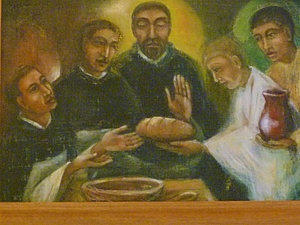 The "miracle of bread" During a famine, angels brought Dominic and his companions bread and wine

The "Table of Mascarella" is one of the oldest depictions of St. Dominic 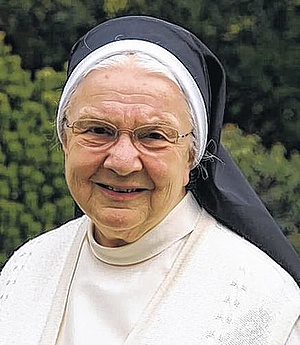 Sometimes art can convey a message particularly well. Sister Liboria Menke has painted the miracle of bread of St. Dominic and his brethren. Looking at the painting, it becomes clear how important it is to accept God's gifts and pass them on.

"St. Dominic at table with his brethren"

is the motto of the jubilee celebrated by the entire Dominican Order in 2021: the 800th anniversary of the death of St. Dominic, who died in Bologna on 6 August 1221 and found his final resting place in the Dominican church of   "Santa Maria della Mascarella". The church holds the treasure of the "Table of Mascarella".

The picture (Foto in the middle) shows Dominic sharing a meal with his brethren and is the first (known) picture of Dominic taken after the canonisation of the founder of the Order. Such was Dominic's attitude: firmly rooted in the words of Holy Scripture and the celebration of the Eucharist, from which came the common mission of all the members of the Order to bring people the bread of God's Word, truth, love and care. A tradition makes the deep, intimate relationship of St. Dominic and his brethren to God clear: A famine had broken out and Dominic and his companions had no more bread to eat. Angels came and brought bread and wine to the community.

The "miracle of bread" is an oil painting by Sister Liboria Menke OP of the Oakford Dominican Sisters painted in late 1950/early 1960.

It is God to whom we owe all gifts

The posture of the hands is remarkable: the giving hands of God, represented by the angels, the receiving hands of the brothers, the blessing hand of Dominic, head of the table and spiritual Father of the Order.  Then the reverent look at the bread and wine, the grateful look upwards. It is God to whom we owe all gifts; he establishes and promotes true communion with him and our communion with one another. From this arises the task, the mission of each member of the Order of Preachers and of the respective community: to accept God's gifts, to honour them, to live from them and to pass them on.

The "we" is important not so much the "I"

Especially in these difficult times of the pandemic, we must always remember: the "we" is important, not so much the "I"; if everyone thinks of the other first, stands by them and helps them with what they have, then no one comes up short. Sister Liboria painted this picture in South Africa in Greytown in the late 1950s/early 1960s. It was her first oil painting. It was important for her to capture the mood. She did not know the early "Table of Mascarella".

The painting came to the Generalate of the Oakford-Dominican Sisters in Bedfordview via Oakford and now hangs in the dining room of the Congregational leadership in Benoni, South Africa.