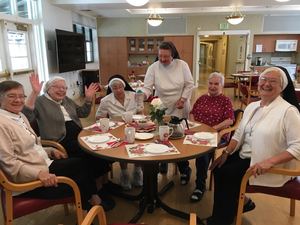 A little time out in everyday life is necessary, especially after all the Corona restrictions. Therefore, Sisters Karolina, Marianne, Rosalia, Sophie and Nicolina recently met with Sr Margarita MDJ OP for a spontaneous coffee party at St Martin's, the nursing home of the Dominican Sisters of Mission San Jose, USA.

Since 2004, our sisters in need of care have found sisterly welcome in Mission San Jose. At first, it was only individual sisters who, for a certain time, e.g. for the recovery after a hip operation, were lovingly cared for there and were able to regain their strength. Now, five of our sisters are spending their twilight years in St. Martin.

There has always been a cordial connection between the two Congregations, both in Germany and in California, USA. At times, our sisters were involved in pastoral care for the elderly at Mission San Jose or in teaching English to the MSJ sisters who had moved from Germany. Our sisters also did translation work when the MSJ sisters from the USA met in Germany.

For larger meetings the Oakford-Sisters have been generously offered the use of Mission San Jose's facilities.

In 1235, Count Konrad von Wasserburg and his wife Kunigunde founded the Altenhohenau convent. He founded the first Dominican convent in southern Bavaria in 1235 as compensation for his unfulfilled promise of a crusade, and it existed without interruption until it was dissolved by secularisation in 1803.The convent church was dedicated to Saints Peter and Paul and is still an important church today. After the 30 Years' War, external and internal reconstruction began, to which the church owes its present appearance. From 1923 to 2013, the convent in Altenhohenau became a branch of the Dominican Sisters of Mission San Jose, California, USA. They ran a farm there and a boarding school (primary and secondary school) until the 1990s. In mid-2013, the few remaining Dominican Sisters of Mission San Jose moved to the motherhouse of their congregation in California.