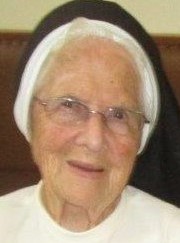 “A new-born baby is God's opinion

that the world should go on. "

Anne Delahunty was born on 29 February 1924 in Raheenleigh, in the Diocese of Ossory, in Ireland.

At the age of twenty-three, she entered the Oakford Congregation at Chingford in London in July 1947. After her novitiate, Sr. Kieran was professed in February 1949, making final vows as an Oakford Dominican in February 1952. She trained as a general nurse, a theatre nurse and a midwife in London before being sent to South Africa, arriving in Durban on the Carnarvon Castle.

For about 45 years, Sr. Kieran nursed at Marymount and Marifont Maternity Homes, and at Villa Assumpta home for the elderly.

Sr Kieran enjoyed her work, and valued God’s ongoing creation in the cry of a newborn baby. What she found difficult was witnessing the death of a mother or a new baby. She valued friendships and family and maintained contact with many people.

In her years of retirement at Villa Assumpta, Sr Kieran continued to minister to the sisters and residents. She loved the Earth and spent time gardening and caring for flowers and plants, especially orchids.

“God has been very good to me,” she said, “and I praise and thank him.”

May she be an advocate for all of us from her new life.

The Requiem Mass was celebrated on 16 October. in Pieternmaritzburg, South Africa.