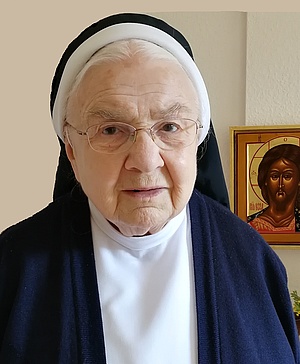 On 26 March, Sr Liboria Menke OP celebrated her 90th birthday in the convent at Neustadt in the company of her fellow Sisters. Sr Liboria was born Maria Theresia Menke on 26 March 1931 in Eissen, a small village in the Warburger Börde. After the death of her mother and the remarriage of her father, the family moved to Paderborn in 1933, where she grew up with eight siblings. A day after her 14th birthday, her family lost all their belongings in the bomb attack on Paderborn. "We only had what we were wearing," the 90-year-old remembers. Her father was on the Western Front and later a prisoner of war.

"It was a hard time," says Sr Liboria. "But I always felt as if a hand of blessing had been upon me and my family." The harshness of the post-war period, the hardship of the people and the desire to live in a closer relationship with God and to be there for the people matured into her decision to live in a religious order. She made contact with the convent at Neustadt and was invited for a "come and see".

Sr Jacinta Grübel OP, who came from Neustadt-Erlach and who died recently, opened the door for her. It was a fateful encounter, as Sr Jacinta later became her companion in South Africa.  Sr Liboria arrived at the "Missionshaus St Josef" in Neustadt on 31 July 1951, although she should not have been there until 1 August. "I definitely didn't want to be late," she says with a laugh. Her goal was clear: "I wanted to go to the mission." After her novitiate, she started her journey by ship to South Africa on 14 October 1953.

Sr Liboria lived and worked in South Africa for 19 years ...

In Greytown, a small town at the foot of the Drakensberg in the Natal Province (now KwaZulu Natal), she studied music and obtained her licentiate as a music teacher. She also taught music, German and religion in the convent school. For 19 years Sr Liboria lived and worked in the institutions of the Dominican Sisters of St Catherine of Siena in South Africa. Her creativity did not go unnoticed by her Prioress General at the time, and so, in 1971, Sr Liboria was sent to Rome, where the Congregation had  opened a house for pilgrims.  There she helped, among other things, with the catering for the guests. She was also allowed to study sculpture at the "Akademia di belle Arti".

... and at St Michael Reha-Centre in Neustadt for 33 years

In 1975, Sr Liboria returned to Neustadt. At first, she worked as a trainee in occupational and music therapy at the district hospital in Lohr. Then, from 1977, she led the art, music and speech therapy section of the St Michael Reha-Centre in Neustadt for 33 years with great dedication.

In the creative work training, she taught the rehabilitants how to work with different materials such as silk, fabric and clay and how to paint with acrylics and watercolours. Together with the rehabilitants, she rehearsed theatre plays and developed shadow and puppet shows with home-made puppets, and designed the stage and costumes.

Working at the rehabilitation centre “taught me a lot and opened my eyes to the value of our God-given human dignity and, at the same time, our human frailty. It was a constant giving and being gifted at the same time."

In the summer of 2010, she retired from working at the rehabilitation centre. "Now I have time for art and everything that had to take a back seat before, and I enjoy it", she says. She paints, plays music and likes to go for a walk around the convent. For 40 years, she played the organ in the Neustadt parish church. She also directed the church choir.  Her creativity finds one last opportunity for expression in the flower decorations in the convent.