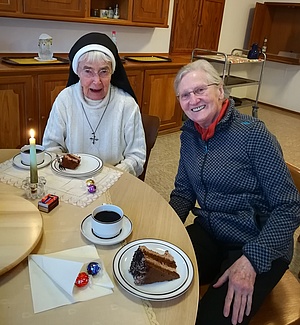 Sr. Albertina and Sr. Dagmar, both ob them with roots in Cologne. 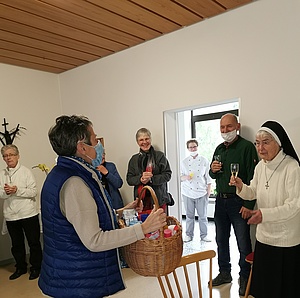 Conny Maier congratulates on behalf of all employees with a basket full of "healthy" things ...

“Et kütt wie et kütt” (it comes as it comes) has been a life-long motto for Sr. Albertina Mauel OP who celebrated her 90th birthday on 10 November 2020 with her fellow sisters in the convent at Neustadt.

She was born in Leverkusen and grew up in the Rhineland with two younger brothers. Her youngest brother was born after her father was killed in a bombing raid during World War II. This experience shaped her concern for her family on one hand, and on the other hand, she experienced on a daily basis that her life was carried by God. After completing secondary school, Sr. Albertina felt the desire to work with children and decided to attend a school for childcare assistants.

She worked as a childcare assistant first on the island of Wangerooge (Germany), then with the family of the German Consul General in Sweden. There she also came into contact with Dominicans. Back in Cologne, she discovered a flyer from our Congregation in the Cathedral and entered Neustadt in March 1958.

After her first profession in 1959, she worked in the kindergarten in Neustadt.  She then trained as a remedial teacher and worked for many years in the "Rehabilitation Centre St. Michael" at Neustadt. After her time in the rehabilitation centre, she got involved in the parish, where she visited the sick, the dying and the bereaved.

During a priestly vacancy, she was the first woman in the diocese of Würzburg to be given responsibility for the running of a parish (i.e. in Neustadt.)  In addition to the pastoral apostolate, she gave guided tours through the church and published the history of Neustadt and its monasteries in the brochure "Traces of Blessings".

No wonder Sr. Albertina has become a rock to the people of Neustadt!  Although the past few years have been shaped by various diseases, she has remained hopeful that this life is a transition to the ultimate life in God.  We wish Sr. Albertina a continued blessed life with trust in God's guidance.